A Century of Jewellery

Jewellery Through The Ages: 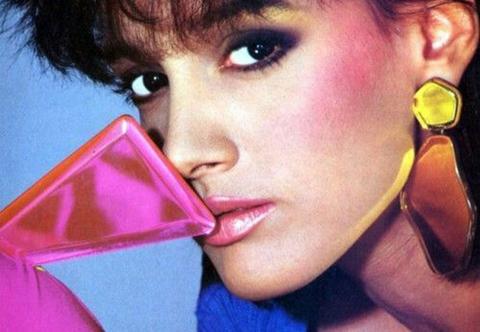 It’s almost 2019, the last year of our current decade. Jewellery is becoming bigger and bolder than ever. Just in the last year we have seen the chunkiest chains and intimidating knuckle duster rings. We can only imagine 2019 will be full of shocks and surprises. Even the most traditional designers such as Stella McCartney and Celine have favoured statement jewellery over subtle pieces to enhance their runway looks, proving that fashion is expanding in, not only size, but also audacity.

But as we know, fashion is constantly looking to the past for inspiration. The cocktail ring finds its origins in the 1920s, yet is today’s staple jewellery box item. We saw a revival of 80s style jewellery this year, as it gleamed in many designer collections. In looking to carve future trends, it seems we often glance back to our jewellery heritage, redefining old trends in innovative and fresh ways. So which decade will 2019 be drawing its influence from? Take a look at a century of jewellery and predict the trends of 2019. Remember, you saw it here first! 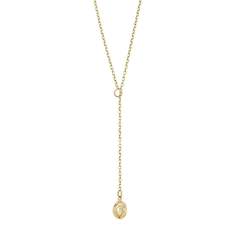 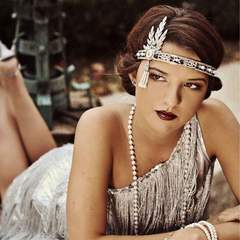 Think geometric, linear, and stacked. The 1920s was an age of excess for jewellery. Diamonds and pearls took centre stage in a cabaret of glitz and glamour. Women adorned their hands, wrists, ankles, heads - literally anywhere they could pin or place a diamond. Armed with the image of the flapper girl and the influence of Tiffany & Co., a newfound love of shining gemstones was born. Cocktail rings, jewelled headpieces, and strings of pearls were jewellery box essentials. For a modern twist on a 1920s classic, Laura Adele’s Caged Pearl Lariat Necklace will inspire 1920s glamour at your next cocktail party. 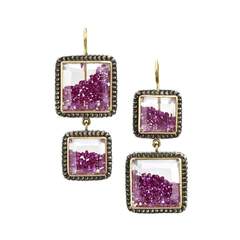 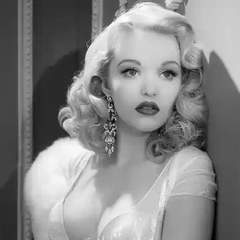 Imagine if 1920s jewellery was injected with three-dimensionality and boldness - there you have jewellery of the 1930s! The geometric forms took on XL sizing, adopting sapphires and rubies as its preferred gems. Yellow and rose gold stepped into the picture, with bold pops of colour defining this decade of extravagance. Think of the 1930s as the much less demure sister of the 1920s - similar in style, but made of entirely different compounds. Moritz Glik’s Reverse Gold Earrings are the epitome of 1930s fun. The contrasting rubies and white sapphires marry beautifully with the yellow gold form. Be vivid and vivacious channeling 1930s luxury. 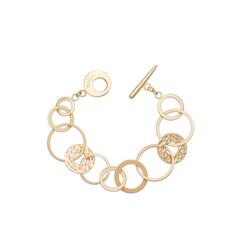 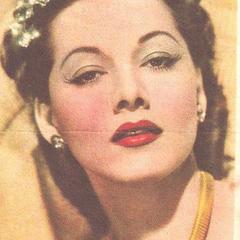 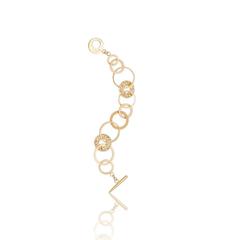 Whilst coloured gemstones dominated the 1930s, the 1940s saw a revival of the diamond. Marilyn Monroe’s Diamonds Are Forever clearly had an influence on consumers as they raced to bejewel themselves in the gleaming white gems. Gold was the precious metal of choice, and over the decade the brooch was born back into fashion. The war made platinum rare and hard to come by, and so gold rings, bracelets and necklaces became the new premium pieces to own. Biiju’s Slinky Bracelet crafted from 18kt gold is the essential piece for you to embody 1940s elegance. The toggle clasp adds an delicate touch to this bold bracelet, so you can personify all the glamour of a 1940s movie star. 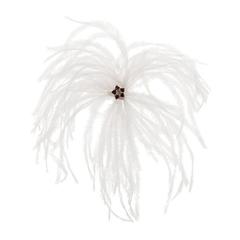 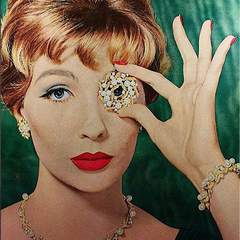 An ultra-feminine aesthetic dominated the 1950s. Feminine fashion silhouettes cinched in at the waist were paired with jewellery to compliment this supposedly ‘womanly’ form. Jewellery in ensemble pieces steadily emerged in the housewife’s jewellery box, with matching brooches, necklaces and bracelets completing each set. The post-war boom allowed for more elaborate styles such as personalised engravings and textured surfaces. Augustine Jewels’ Brooch of Ostrich Feather and Garnet Hearts shows how timeless the 1950s aesthetic is. This bold brooch is an elegant way to add some old-school glamour to your outfit. The feathers radiate 1950s delicacy, yet the modern woman is sure to add her modern twist to this piece. Usurp the politics of 1950s femininity with Augustine Jewels beautiful item. 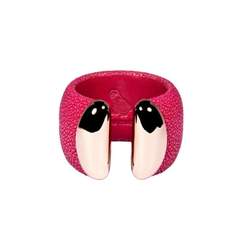 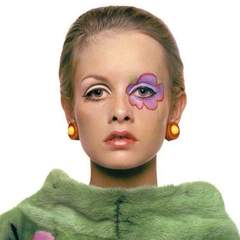 The decade of social change also witnessed a huge sartorial evolution. Skirts became shorter, colours became brighter, and jewellery became wilder. Forget precious metals, kitsch and cute plastic earrings, necklaces and rings became affordable and therefore hugely popular. Glass and crystals became the alternative to expensive gemstones. Floral motifs danced in the limelight. Handcrafted jewellery even began to emerge in high fashion. This truly was a pivotal decade for jewellery, solidified through the birth of supermodels into society who showcased these outrageous looks. A cuckoo moment’s Samba Stingray Leather Bangle will infuse any party outfit with that renowned 1960s fun! 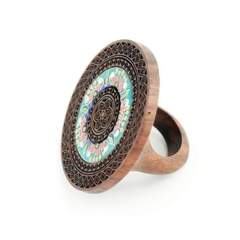 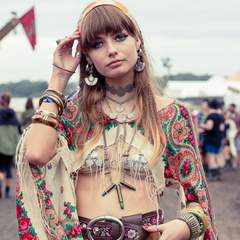 The 1970s was diverse in terms of jewellery trends. The disco movement championed sparkling gold glitzy pieces. Yet on the other end of the spectrum, leather cuffs and beaded necklaces peppered the Hippies at Woodstock. The only constant was the denial of ‘less is more’, because in the 70s, more wasn’t even enough. Layered bangles, necklaces, and rings adorned the youths of the 70s. The use of unconventional materials such as plastic, leather and wood also became commonplace. Kimili’s Round Wooden Ring will infuse your look with the all-loving 1970s spirit. As a brand that champions individuality and uniqueness in terms of nature and love, Kimili’s jewellery certainly embodies the Hippie philosophy. 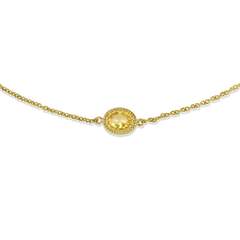 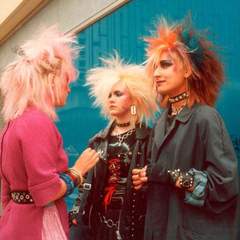 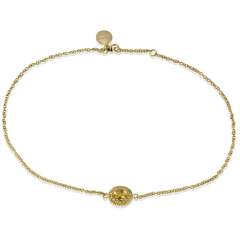 Contrasting the Hippie movement of ‘one love’, the 1980s bore the rebellious movement of punk. Non-conformity was visible in every aspect of self-image, from hairstyles, to make-up to, you guessed it, jewellery. Costume jewellery with faux pearls and gems became the punk girl’s uniform, alongside oversized earrings, choker necklaces, and an anti-establishment attitude. People championed individuality and self-expression. Jewellery pieces were mixed and matched and worn in genius new ways. You remember that iconic moment where Princess Diana wore a diamond and emerald choker as a headband? Redefine the punk aesthetic with this delicate gold choker by Vintouch Italy. The citrine gemstone will infuse the punk choker aesthetic with fragility and style, making this a versatile 80s-inspired piece. 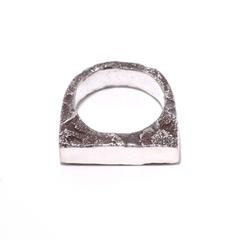 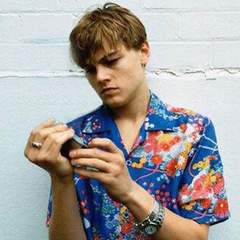 Silver became the defining metal of the 1990s. Choker necklaces also made their peak with bold beaded designs and body jewellery was introduced. But most significantly, the 1990s saw the slow emergence of men’s jewellery. Male celebrity influencers such as Will Smith and David Beckham became fashion icons, inspiring bolder dressing choices which included jewellery. Engagement rings became popular for men as well as women. Men’s jewellery suddenly grew into a new and exciting consumer market. To mark this exciting revolution, we’ve chosen L. Skelly Jewellery’s Plana Ora Ring as our 1990s pick. The unique shape will inspire conversation and style, making you a millennial trendsetter of today. 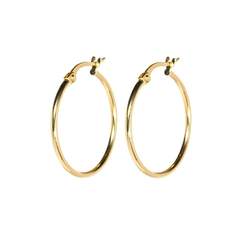 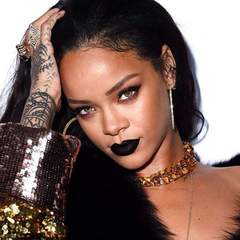 The new millennium was marked by hip-hop inspired jewellery. Big hoops, rhinestones and polished yellow gold saturated pop music videos, MTV, and the ‘confiscated jewellery’ box in schools. The 2000s also witnessed the revival of bohemian jewellery. Wooden pieces were worn by the likes of Posh Becks as African-inspired jewellery became popular during this decade. Pay homage to the R&B queens of the 2000s with a pair of classic gold hoop earrings. Think Destiny’s Child, Mary J Blige and JoJo as you channel diva finesse in XISSJEWELLERY’s Everyday Medium Gold Hoops. 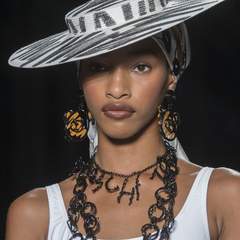 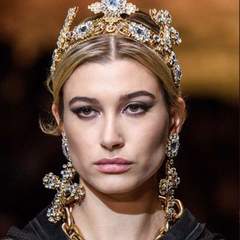 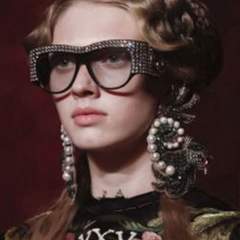 And here we are, the 2010s - our current decade. Coloured gemstones have found their way back into fashion - and we’re thankful! Not that we don’t love a gold hoop, or a bold cocktail ring. But the timeless magic of an amethyst or a topaz will last a lifetime. As we know, fashion jewellery is getting bigger and better. We have thousands of amazing picks to find your own special piece to define our decade. It is the decade of risk taking. The decade of experimentation. Set the trends of tomorrow with a piece out of our leading collection.

What jewellery piece will define your decade? Find it here.