We take a look into the history and myths behind Amazonite meaning; commonly known as the ‘prosperity stone’. Shop all amazonite jewellery.

Amazonite is an opaque blue-green variety of microcline feldspar. It is a mineral with a limited supply; formerly found in Russia, more recently Amazonite has been found in Colorado and Virginia, as well as Madagascar and Brazil.

Amazonite exudes a beautiful blueish green hue and for many years the source of its colour was a mystery. Recent studies suggest that the stone gets its bright colour from small quantities of lead and water in the feldspar. It has a vitreous lustre, and when the stone is polished it resembles finely cracked or spider-webbed marble.

Rated 6 - 6.5 on the MOHS hardness scale (grading of relative hardness of minerals), Amazonite jewellery is considered hard enough to wear every day but care should be taken with exposed gemstones. Known to many as the ‘prosperity stone’, we explore the most popular current and historical views on Amazonite meaning. 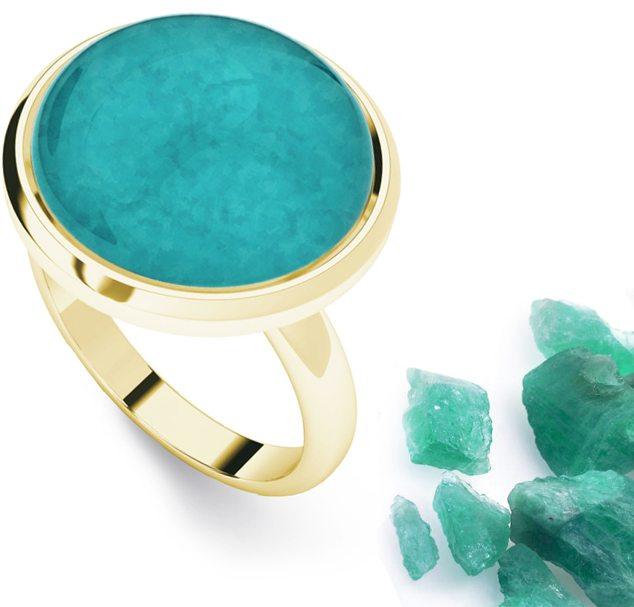 For centuries, cultures all over the world have held different beliefs about what the true Amazonite meaning is and what benefits it can bring to the wearer. It is thought to be named after the Amazon River in Brazil, however it is a very tenuous link as no deposits have been found there and mineralogists believe there is no green varieties of feldspar near the river.

Often referred to as the ‘prosperity stone’, Amazonite meaning has been linked with success and fortune; some still believe that hanging Amazonite over a doorway will bring prosperity to a new business. As well as encouraging prosperity, Amazonite meaning is also associated with calming the soul and soothing the spirit, and in turn, empowering the wearer with the courage and strength to express themselves.

Believed to be a very loving and truthful stone, Amazonite is connected to increased compassion and helping the wearer to see both sides of a problem.

As a powerful talisman of healing and prosperity, Amazonite has been used in jewellery and cut into beads since the time of the early Mesopotamian cultures.

Jewellery made from this Amazonite was found in the tomb of the Egyptian Pharaoh, King Tutankhamun.