Considered the king of gemstones and commonly believed to represent love, health and wisdom, the opulent red ruby is the commonly regarded as the July birthstone. Ruby is one of the most coveted and valuable precious gemstones, falling second only to diamond. We delve a little deeper into the history and meaning of the July birthstone. Shop all ruby jewellery.

Originally, it was believed that the power of birthstones was heightened if worn during its corresponding month and, as a result, people would have a full set of twelve to rotate throughout the year. However, it is now much more common for people to wear the single stone representing the month of their birth, and the characteristics and luck associated with it. There is no better way of celebrating a July birthday than by giving your loved the most coveted July birthstone, a beautifully rich red ruby.

Traditionally regarded as a symbol of love, passion, courage and emotion, rubies have been a highly regarded prized possession of kings and emperors throughout history, and it is still one of the most desirable gemstones. With the highest per-carat price of any coloured stone, ruby is by far the most important gem of all of the coloured precious stones. 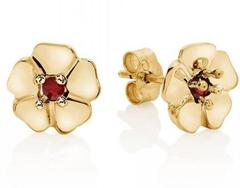 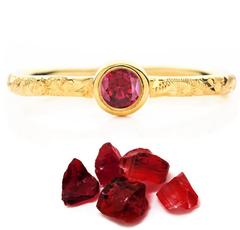 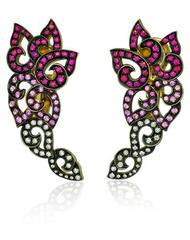 Known for its lavish red hue, rubies come in a range of shades; from orange-red to a cooler bluish toned red. One of the highest valued varieties of the July birthstone is the Burmese ruby; an extremely high quality stone in a rich and full red shade, with a slightly blue hue. This colour is also often referred to as ‘pigeon-blood red’, which interestingly doesn’t refer to the colour of a pigeon’s blood, but instead the colour of a pigeon’s eye.

It is believed that wearing a fine red ruby bestowed good fortune on its owner, and can bring positive attributes including harmony, contentment, integrity, strength, success and protection from evil. Old folklore believed the ruby to represent the sun, because of the inextinguishable flame that the deep ruby red gem emanates – making it the perfect July birthstone. Those who are born in July are often said to be devoted, courageous, confident, and full of vitality, so the ruby is a fitting Cancer birthstone.