We take a look into the history and myths behind kyanite meaning; a beautiful blue gemstone known to induce tranquillity and calm, as well as enhancing communication and psychic awareness.

Kyanite is a typically blue silicate mineral commonly found in aluminium-rich metamorphic pegmatites and sedimentary rock. The kyanite gemstone is named after the Greek word ‘kyanos’ meaning ‘dark blue’, and the most beautiful variations of the stone are those with an intense cornflower blue colour. The stone is most commonly found in areas in Brazil, Kenya, Mozambique, Norway, Switzerland and the USA.

This radiant and translucent gemstone is famous for its variations in hardness, and measures 4.5 – 5 on the Mohs hardness scale. It is also made up from several different layers, making it very easy to split; this is known as a well-developed cleavage. Due to the stone being relatively easy to damage when it comes to kyanite jewellery, the gemstone is usually limited to earrings, pendants and brooches. 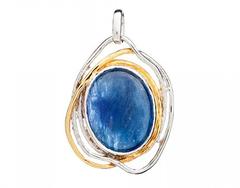 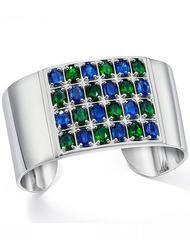 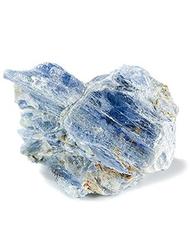 Throughout history there have been a range of myths and opinions what the true kyanite meaning is and what it can bring to the wearer.

The stone’s clear and strong blue hue means that kyanite meaning is often directly associated with loyalty, serenity, calmness, innovation and dreams. It is an extraordinary crystal of connection, and many people believe it opens the mind and can enhance telepathic and psychic abilities.

Other positive attributes that kyanite meaning is linked with include loyalty and fair treatment of others. It is thought to assist in working through disagreements and disputes, and can help to repair damaged relationships. It is also used in negotiations, diplomatic missions and any kind of communication between disharmonious people. It is thought to be a beneficial stone in these situations due to the kyanite meaning supposedly allowing disparate energies to move into resonance and find a common frequency. It is also said to be effective on the throat and third-eye chakras.

Pulverised kyanite crystals are used in the manufacture of spark plugs and other heat resistant ceramics.

Although the most popular shade of kyanite is blue, the gemstone also occurs in shades such as white, grey and green.