We take a look into the history and myths behind the moonstone meaning; known for its moon-like appearance and linked history with the moon goddess.

A variety of feldspar, moonstone has a ghostly sheen that moves under the surface, giving it the appearance of moonlight glowing in water. Like other feldspar minerals such as labradorite and sanidine, moonstone can show adularescence; a milky glow that comes from below the surface of the gemstone. Its delicate beauty and established heritage make it one of the most coveted and popular gemstones from the feldspar group.

Records show that Romans were using the stone to make moonstone jewellery back in 100AD. Due to its history in cultures all over the world, there are various beliefs and views on the moonstone meaning; we explore a few of them. 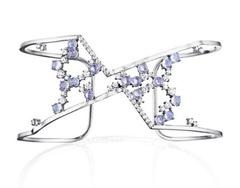 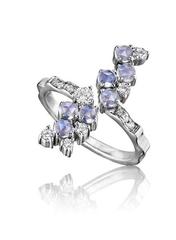 Throughout history there have been a variety of myths and opinions regarding the true moonstone meaning and what it can bring to the wearer.

Moonstone is a mysterious stone, and its secrets are locked under a pearly veil. Since the beginning of time, the moonstone meaning has been heavily linked with the moon; it has been used as a talisman of protection, a path to wisdom and a channel for prophecy. And it is easy to see why. Its internal structure scatters light and this visually arresting effect is similar to a full moon beaming down.

A historically popular gem, moonstone has been used in Roman jewellery for thousands of years and was a common gemstone choice in the Art Nouveau period. In ancient India, the sacred stone was thought to reveal the future of lovers if placed in their mouths during a full moon, whereas in Europe, moonstone meaning was commonly associated with bringing about the reunion of lovers. In crystal healing, moonstone is believe to help calm responses and stress, and avoid overreaction. Many think it brings hope, enhances feminine energies and intuition.

Moonstone is most commonly found in Myanmar, Sri Lanka, India, Brazil, Tanzania and the USA.

According to Hindu mythology, moonstone is made of solidified moonbeams.