Ever wondered what the birthstone is for September? Well September babies are lucky enough to have one of the most coveted precious gemstones as their birthstone; sapphire. We delve a little deeper into what sapphire means and the history of the September birthstone meaning. Shop all sapphire jewellery.

Historically people believed that the power of birthstones was increased if worn during its corresponding month, and so people would wear a different stone each month. A few hundred years on and now it is much more common to just wear the stone that represents your birth month. Celebrate a September birthday with a beautiful piece of sapphire jewellery.

Typically a saturated blue gemstone, sapphire is part of the corundum family. Blue is by far the most common colour for sapphire, however the gem comes in an extensive colour range featuring most shades apart from red. Derived from the Latin word "Sapphirus" meaning blue, sapphire has been a highly coveted and sought after gemstone since the middle ages. Next to diamond, sapphire is the hardest mineral on earth. 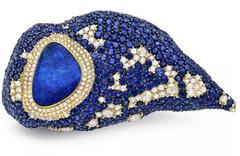 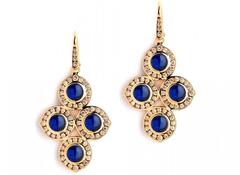 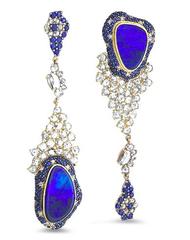 Sapphire is immersed in history with most cultures offering varied theories on what the true September birthstone meaning is. Back in the Middle Ages, people believed that wearing sapphire jewellery would suppress negative thoughts whilst in ancient Persia they believed that if it was ground up it could be used as an all-purpose medicine that cured ailments.

Sparkling in all its celestial hues, September birthstone meaning has predominately been linked with wisdom and royalty. For centuries, sapphire has been referred to as a symbol of the heavens, guarding innocence, banishing evil spirits and promoting good health. A popular September birthstone meaning is that by gifting a piece of sapphire jewellery it will bring prosperity, joy, fulfilment and inner peace to the wearer. Blue sapphire is a wonderful meditation tool which can help with translating the meaning of messages received, as well as expanding awareness.

Sapphire is currently one of the most popular coloured gemstones for an engagement ring. By far the most famous sapphire engagement ring is the 12 carat oval Ceylon sapphire ring which belonged to the late Diana Princess of Wales and is now worn by Kate Middleton, Duchess of Cambridge.