We take a look into the history and myths behind sodalite meaning; known for its traditional royal blue shade and affordability.

Sodalite is a rich royal blue tectosilicate mineral that is often used as an ornamental gemstone in jewellery. Some sodalite is opaque, however more often than not the crystal is transparent to translucent. The sodalite stone was first discovered in 1811 in Greenland, however it did not become widely used until 1891, when a sufficient quantity was unearthed in Ontario, Canada and it started to become faceted and used in jewellery.

Sodalite is a light, relatively hard yet fragile mineral, named after its sodium content. Although the gemstone can occur in grey, yellow, green and pink, it is most commonly known for its blue colour, which is the most popular shade for jewellery. Although sodalite is similar to lapis lazuli and lazurite, it rarely contains pyrite and it has a more traditional royal blue hue; some refer to it as a “poor man’s lapis” due to the similar colour and much lower price point. 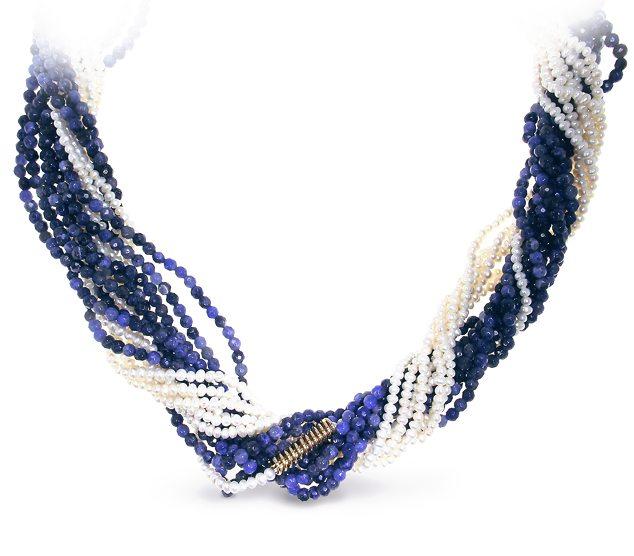 There is always a range of myths and opinions surrounding the meaning of gemstones, so we take a look at some of the most popular theories linked to sodalite meaning and what it can bring to the wearer.

Crystal healers believe that sodalite meaning is associated with helping those in a state of mental confusion and relieving stress. It is a stone associated with the Chakras (particularly the third eye), and is thought to have a calming effect on the emotions and instil inner peace into the wearer. Many refer to it as the stone of logic, efficiency and rationality as sodalite meaning is strongly linked to healing breaches in communication, as well as bringing truth to the conversation and ending arguments or disagreements. It increases intelligence, knowledge and learning, and can unite the logical with the spiritual.

Sodalite is sometimes referred to as Princess Blue after Princess Patricia of Connaught, who fell in love with the gemstone whilst staying in Canada, that on her return to the UK she had whole areas of various rooms in Marlborough House decorated with Sodalite.

The name sodalite comes from the English words "sodium content". Sodalite was named in 1811 by Thomas Thomson for whom the mineral thomsonite was named.