The Best Jewellery Looks At The 39th Brit Awards

The 39th Brit Awards was held in the O2 arena yesterday evening. The night was full of lavish gowns, incredible music and out of this world performances. The event honoured music greats from the UK and around the world and celebrated accomplished artists and fresh-faced newcomers. The Brits are always a fun and uplifting award show, especially when Jack Whitehall is presenting and the 39th Awards was no exception. The performances were jammed packed and the O2 was full of glitz and glamour. 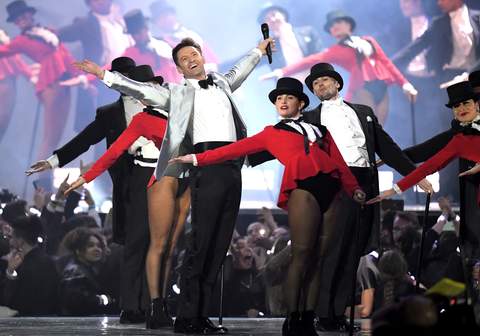 The Brits is definitely a more relaxed award show compared to the Grammys and the Oscars. The show opened with an invite to the ‘Bryt Festival’, a hilarious and well-timed spoof of the disaster that was Fyre Festival. The opening number was performed by the one and only Hugh Jackman, singing ‘The Greatest Show’ from the worldwide phenomenon The Greatest Showman, in which he plays PT Barnum. The performances were spectacular but I had to mention two of my favourites. One of the funnier moments of the evening was seeing Sam Smith strutting over the stage and doing what can only be described as a ‘sassy dance’. Finally, Jess Glynne gave a very moving performance of her song ‘Thursday’ featuring H.E.R, where she removed all of her makeup on stage along with a legion of women behind her. 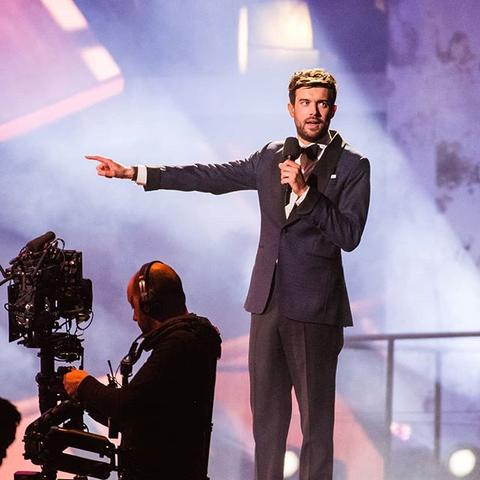 George Ezra took home the Brit Award for Best Male and 2018 Critics Choice Jorja Smith was awarded Best Female. The 1975 were the big winners of the evening, winning Best Band and Best Album. Beyonce and Jay Z a.k.a The Carters won Best International Group and accepted the award standing in front of a framed portrait of Duchess of Sussex, Meghan Markle. Calvin Harris won his first ever Brit award which was closely followed by his second.

The red carpet and evening event saw more colour than recent award shows, with pink, orange, red and yellow dresses dominating the red carpet. Silver accessories and statement earrings were everywhere and Maya Jama and Vick Hope rocked the trend. Dogtags and chains were worn by many male guests and artists, like James Bay, Ramz and James Arthur. 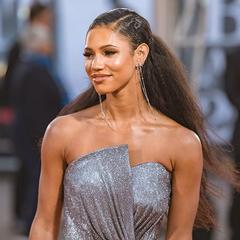 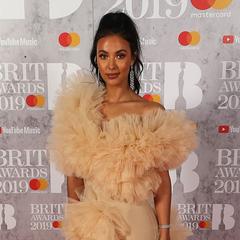 Let’s get into the best jewellery looks from the evening.

Is there anything Dua Lipa can’t do? Not only did she win British Single of the Year with ‘One Kiss’, but she had FOUR outfit changes! Her red carpet look was a black lace and pink silk Christopher Kane dress and she accessorised with bold, statement rings and two open chokers, layered high up the neck. The gold and silver tones of the jewellery complimented her colourful dress perfectly and she kept this theme running throughout her outfits. Dua’s second look was a mini blue dress with star accents, which was rumoured to have been a reference to Brexit. Whether that’s true or not, the stars become the focal point of her second look as she wore oversized statement star earrings that fell down to her shoulders. 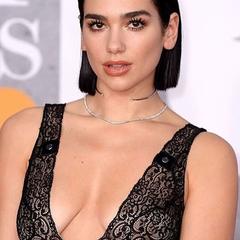 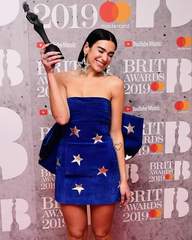 Dua’s third look was for her performance of ‘One Kiss’. She wore a white co-ord which was covered in coloured patterns and shapes and paired it with statement gold jewellery. She wore a bold statement necklace that sat high up the neck and matched with similarly embellished gold hoop earrings. The necklace spelled out ‘Chanel’, a sweet tribute to Karl Lagerfeld, who died on Tuesday. Dua’s final look was for the afterparty, where she wore a studded bra with a feathered jacket over the top. She accessorised with silver jewels dripping down her hair. All four of her looks were over-the-top and extravagant - we’d expect nothing less! 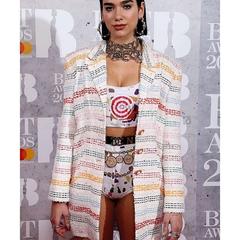 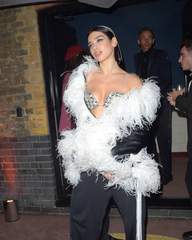 Paloma Faith and Laura Jackson both looked stunning in poofy dresses and with matching headpieces and earrings. Paloma wore a metallic orange veiled dress with a matching veiled cape. She wore a decadent headpiece of yellow and crystal jewels that matched her similarly coloured and equally as dazzling earrings. Pairing colour with more colour, Paloma massively stood out and showed that tiaras and headbands are definitely on trend at the moment. TV broadcaster and editor, Laura Jackson wore a similar style to Paloma in a more toned down and chic way. She wore a Simone Rocha white dress with puff ball sleeves which looked gorgeous on her and gave a whole new meaning to maternity wear - Laura is 7 months pregnant. She wore a bright red headband which matched with her red floral motif earrings. 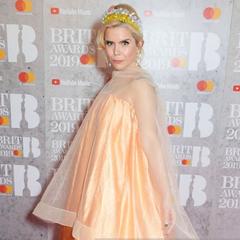 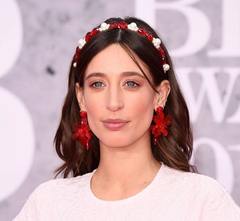 Despite going home empty handed, Anne Marie was still a winner in my eyes with her gorgeous dress and jewellery. She wore a white mini dress and paired it with a Tomo Koizumi komono coat, which transitioned from white to purple, adding a pop of colour to Anne Marie’s look. Her necklace and earrings were from Bulgari and had a lovely art deco pattern. The silvery tones of the jewellery went perfectly with Anne Marie’s outfit. The jewels were subtle enough not to draw attention away from the colourful komono but still beautiful, intricate and made people take notice. 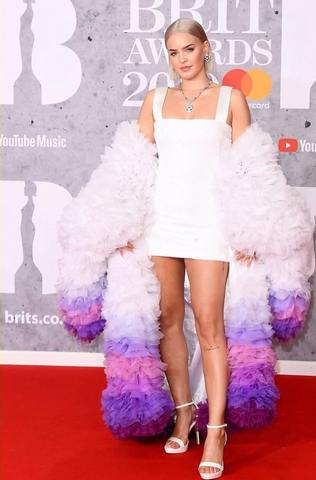 P!nk was the talk of the evening, accepting the Outstanding Contribution Brit Award and closing the show with a powerful performance. She flew in on a hoop from the ceiling and landed among fire and danced in the rain. Her performance also made a political statement with images and references to the #BlackLivesMatter movement. Her red carpet look was understated and simple but with a vibrant pop of colour. P!nk wore a halter neck yellow dress, with a leather jacket over the top. Her jewellery was edgy, powerful and consisted of mostly silver accessories. The mismatched earrings, chunky and bold silver rings and layered bangles completed her colourful look and were in true P!nk style. 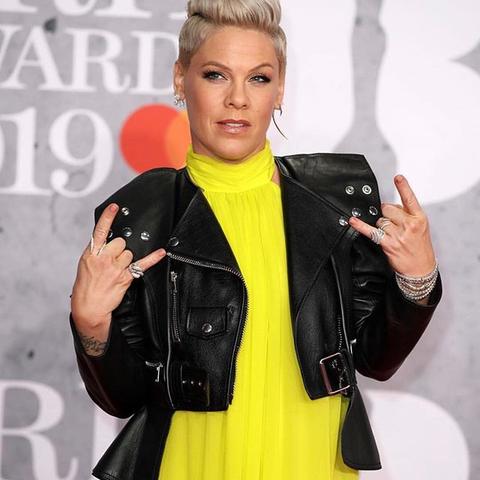 It was hard to miss Daniel Lismore and if you weren’t aware of who he is, you definitely know now! Designer and fabric sculptor, Daniel Lismore truly lived up to his name of ‘Britain’s Most Eccentric Dresser’, dubbed by Vogue. He owned the red carpet, in a red see-through bowl headpiece with a flowy red and yellow dress. He wore a statement and over-the-top red necklace that fell down from underneath the headpiece. Daniel shocked the runway with his eccentric and futuristic look and also provided a few laughs, as he walked into a wall when leaving the carpet. 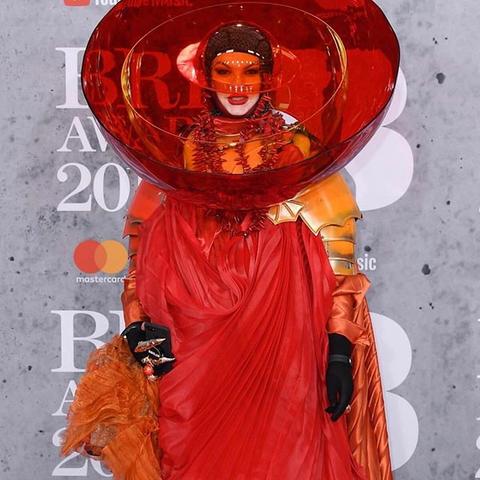