The Best Jewellery Moments From The Tudors

The Renaissance period sparked a time of change and development of style, allowing fashion and jewellery to be explored artistically, with different styles, fabrics and gemstones introduced to the fashion of the time. I don’t know about you, but when I think of fashion during the Renaissance period (1300-1600), I immediately think of the most fashionable people in history: The Tudors.

The House of Tudor had the longest reign in the United Kingdom’s history, spanning from 1485 - 1603. The Tudors made large political, economic and social changes during their reign, shaping the way the UK is today. In 2007, a television show called The Tudors, starring Jonathan Rhys Meyers and Natalie Dormer debuted, dramatising the 40-year reign of Henry VIII, who had one of the most turbulent and progressive reigns in history. The show was a massive success, earning itself an Emmy Award. The show had some of the best costumes ever seen in television, reimagining what the Renaissance fashion would have looked like from historical artefacts, old descriptions and portraits.

The Tudors gave us a fountain of fashion inspiration, but their jewellery is the most impressive of all.

How jewellery was used in The Tudors

Costume designer Joan Bergin did extensive research and had most of the jewellery items sent by designers. The jewellery seen in the show is extremely embellished and luxurious, showing off the wealth and royalty. The six wives of Henry VIII typically wore similar items but with varying colours and gemstones. Crowns, brooches, drop earrings and necklaces were the main jewellery items worn by the women.

The costume designers cleverly recycled a lot of the pieces. In scenes with Anne Boleyn, played by Natalie Dormer, she is seen wearing a necklace which is then later repurposed into a brooch. In a similar way, Jane Seymour, first played by Anita Briem and later played by Annabelle Wallis, is seen wearing a necklace which was later repurposed into a headpiece. Anne Boleyn, arguably the most fashionable in the series, wore an array of gemstones, like pearls, rubies, sapphires and amethysts. Jewellery was also used to show the progression the women took when becoming a Queen. Particularly with Jane Seymour, her jewellery was demure and simple, featuring cross symbols. When she became Queen, her jewellery changed to oversized and bejewelled crowns and tiaras and chunky necklaces.

Here are my favourite looks from The Tudors and how you can bring some Tudor style and Renaissance glamour into your look. 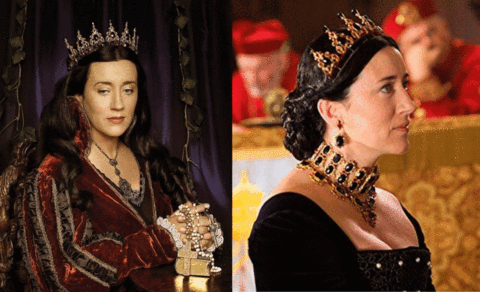 The series starts in the midst of Katherine and Henry’s marriage, something that Henry is trying to get out of. Despite Henry seeking a divorce, Katherine, played by Maria Doyle Kennedy, continues to hold herself like a Queen and dresses like one. Henry VIII’s reign saw a shift in fashion from Gothic to Renaissance and Katherine seemed to favour the former. Katherine wore lots of dark colours and rich gemstones, like rubies and onyx. Katherine also mixed up her style of necklaces, wearing tight jewelled chokers and longer chains with big pendants. 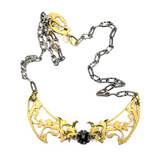 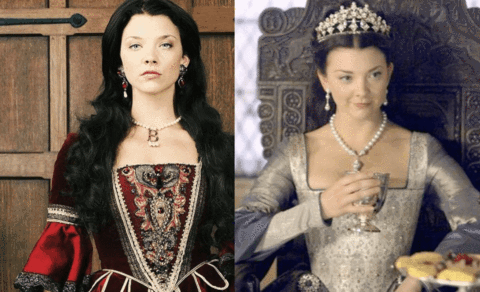 Anne Boleyn was a style icon, never shying away from anything too outrageous or over the top. Anne was known to be a big fan of pearls and this was emphasised in the show. In the programme, she is seen wearing them in multiple ways. Anne’s trademark necklace which is in a the famous portrait of her, is a simple pearl necklace with a ‘B’ pendant hanging from it. Anne wears this a lot throughout the series but specifically when she is courting Henry. Anne varies between simple pearls, like drop earrings and the more extravagant, like her coronation dress, where pearls hang across the neckline of her gown. Pearls are a constant gem and symbol for Anne. When she is beheaded, she makes a point to wear a pearl necklace and matching earrings, so as to die with dignity. 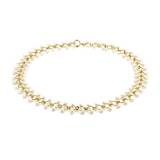 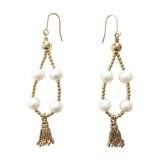 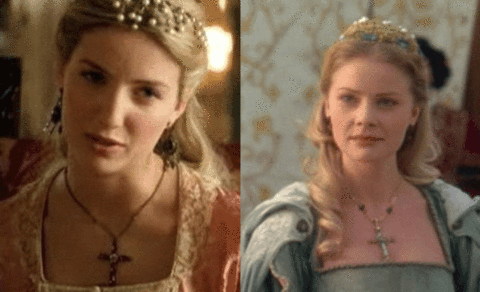 Jane Seymour’s style changed drastically when she became Queen. She wore dainty cross necklaces when she first met Henry and by the time she was Queen, she was wearing large collars, bejewelled crowns and big necklaces with multiple colours. However, the crosses she wore changed from simple accents to jewel studded masterpieces. 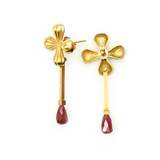 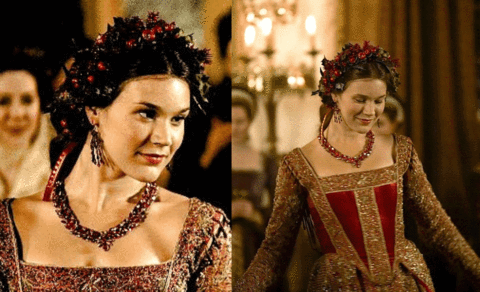 Rubies were used excessively in the programme. As a lover of darker colours and jewels, Katherine of Aragon was regularly seen wearing ruby earrings and matching necklaces. The six wives all wear rubies at some point in the series, but Anne of Cleves had the best look by far. As a woman who wore over the top jewellery and headpieces, her use of rubies was very often, usually in a large statement necklace. 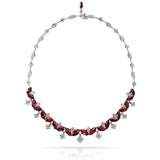 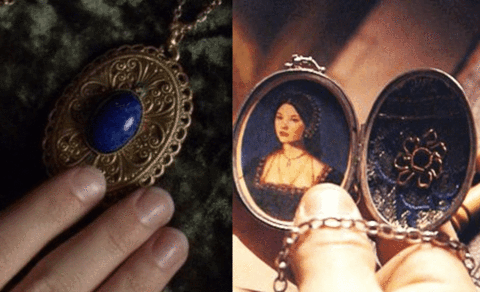 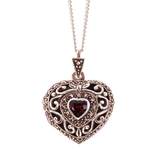 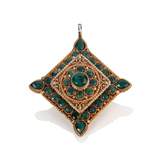 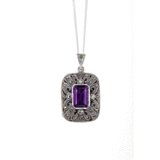