The Best Looks From Killing Eve Season One 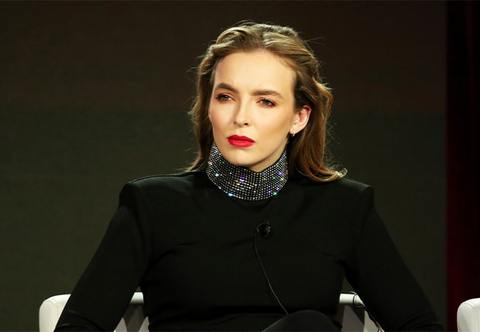 In just a few weeks time, Killing Eve will be back on our screens to serve up some deliciously devious television drama. Upon its debut in April last year, the internet exploded with the latest obsession: a female-centric, fashion-forward, dark and humorous assassination narrative named Killing Eve. Starring Sandra Oh and Jodie Comer, this thrilling cat-and-mouse drama demonstrates what happens when one’s occupation degenerates into obsession. Eve, a MI5 officer, becomes fascinated with the elusive figure of Villanelle (Comer) and pursues the assassin through a series of dark, dangerous, yet sartorially debonair events.

Whilst seduction is inherent to the plot, the costume of the production tempts viewers with enough allure to get them to hop onto the Killing Eve bandwagon. Who knew criminality became even more enthralling when it unfolds via a succession of Burberry gowns and Dries Van Noten suits. From designer jewellery to chic hairstyles and make-up, the dramatic action is elevated through a key attention to fashion detail.

In an interview with the Daily Mail, costume designer Phoebe De Gaye discusses the importance of clothing in the production. Eve is defined by her drab, neutral and incognito wardrobe. Sandra Oh thought it would be a nice touch to have a jewellery piece to help create Eve’s character. Phoebe “found a little ring at home which had been a great uncle’s and she [Oh] wore it throughout filming.”

Details such as jewellery become integral in forming a thorough portrait of a character. Eve’s ring becomes a vehicle to express the sentimental and familial values of her character. The ring even went lost on set for a while. Phoebe comments: “when Sandra got it back it was important for her. I find it interesting that actors can sometimes fix on a prop or piece of clothing as a key to getting into their character.”

As we anticipate the next season of the incredible criminal drama, it seems only right to look at Villanelle’s most iconic ensembles from season one. 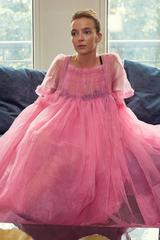 Any assassin who rewards herself with designer clothing, if anything, knows how to look sharp. One of the most iconic looks from season one of Killing Eve has to be Villanelle strutting around the streets of Paris wearing a shocking pink Molly Goddard dress and Balenciaga boots. The Independent dubbed this “one of the most iconic fashion moments television has seen since Carrie Bradshaw was jilted in Westwood.” And, quite frankly, it would be absurd to refute this statement. When has any female assassin on television displayed such attitude whilst wearing an highly feminine, pink designer gown?

In an interview with Vogue, Phoebe De Gaye explains “I thought Molly Goddard’s stuff was just perfect for it because it has that subversive streak,” adding that “in that scene, her minder takes her to the psychoanalyst to see if she’s losing her edge. It’s like she’s sticking two fingers up and saying, ‘Okay, I’m going to dress like a little girl and act like a mad little girl.’” In true high fashion style, standing out with bold outfits such as these ironically allows the assassin to go incognito. 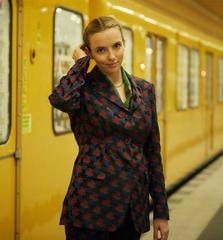 Contrasting the ultra-feminine pink dress, Villanelle literally knows how to dress to kill with masculine silhouettes. Sporting a textures Dries Van Noten power suit, the assassin flicks in and out of the Berlin nightlife scene to complete the murder. This was apparently Jodie Comer’s favourite look and her confidence definitely emanates in the scene. Every woman who has wore a striking suit will understand the poise it instills in the wearer.

Villanelle uses a gold chain and leather blouse to complete the look. The edgy combination of leather, heavy metal and boots is enough to intimidate any man… perhaps that’s why we love it so much! 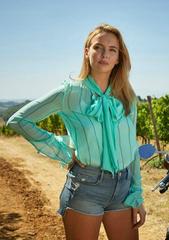 Villanelle sure knows how to sting her enemies. During her mission in Tuscany, Villanelle wears a custom Chloé blouse, denim shorts and gold bumblebee earrings. Again, dressing like anyone would under the hot Italian sun, Villanelle manages to blend in. Critics, such as Ellie Violet Bramley from the Guardian, suggest that the pussybow blouse has duplicitous connotations relating to gender politics and feminism. Perhaps the costume designer used this cut to emphasise the power of a specifically female assassin in an industry supposedly dominated by men.

Either way, the whole ensemble certainly enhances the danger and fearlessness of Villanelle’s character. Grab a pair of Doc Martens, and channel Villanelle’s subverted femininity.

A pastel gown is perfect for a garden party, but hopefully a party that is less eventful than the one Villanelle attends… The Burberry blue lace dress is my personal favourite look of the whole series. Borrowed from her assassination target’s wife, Villanelle ties her hair up with her weapon, feigning the epitome of elegance and innocence. This dress represents Villanelle’s resourcefulness and deviousness. Guns and gadgets aren’t the tools of this assassin. She merely utilises the objects around her and disappears with very little trace.

Seduction and disguise is carried through clothing in Killing Eve. Who knew one could have such a dark and ironically functional relationship with clothing?