Top 10 Most Expensive Jewels In The World

Top 10 Most Expensive Jewels In the World 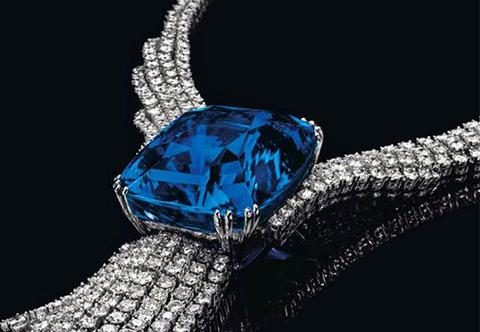 Imagine the sheer awe experienced when man first beheld a diamond. An unparalleled object of beauty.  Clear as water and as bright as stars, radiating mystery and magic you can’t quite comprehend. The word ‘diamond’ stems from the Greek ‘adamao’, meaning “I subdue”, which quite aptly epitomises one’s insignificance in the face of Earth’s most precious substance. Around 320 BC, the world’s first diamond was plucked from the Earth surface. Mysterious and sublime, the diamond was immediately considered a substance of immense value. It wasn’t until the thirteenth century - approximately seventeen hundred years later - that a very exclusive number of diamonds began circulating Europe. They adorned the uniforms of Kings and Queens who flaunted and flourished their perfect jewels.


As industrial techniques soared, so did the demand for diamonds. These precious gems, once reserved for the elite, evolved into a consumer product. Though they were available to all, they were not attainable to all. Diamonds were, are, are will always be, an immensely luxury product. Harbouring centuries of history and value, diamonds are the sovereign rulers of the jewellery market - especially today. Find yourself in bijou bliss and gaze in wonder at the world’s ten most expensive jewellery items. Let your inner Queen dance in decadence… 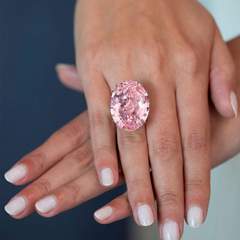 In 1999, The Pink Star was born from a 132.5-carat rough diamond mined in Africa. After two years of intricate craftsmanship, this plush pink wonder was revealed to the world in a lavish ceremony held in Monaco. The jewel itself was mined by De Beers, a corporation with over a century of experience in diamond mining and trading. Internally (and visually) flawless, the pink star diamond is free from imperfections. Just last year, this exquisite gem broke records selling as the world’s most expensive gemstone, for £57.3 million at Sotheby’s in Hong Kong. 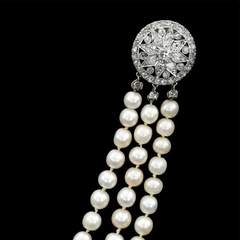 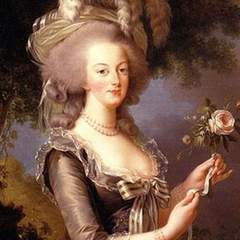 Last month, Sotheby’s Geneva showcased arguably their most exciting lot this year - a collection of Marie Antoinette's royal jewels. The auction brought narratives of one of Europe’s finest dynasties into the public eye, showcasing pieces belonging to King Charles X, the Dukes of Parma and the ill-fated Queen Marie Antoinette. Pictured above, Marie Antoinette’s pearl pendant necklace sold for £28 million - earning the title of the most expensive pearl sold at auction (A record previously held by Elizabeth Taylor’s Peregrina Pearl Necklace, selling for ($11 million in 2011).  Diamonds may be considered the superior gem, yet this auction exemplified how status and heritage are intrinsically bound to worth in the jewellery market. 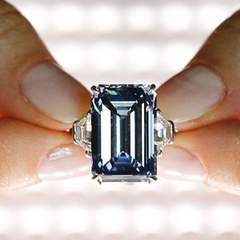 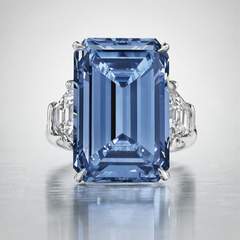 Oblong in shape and opulent in style, the blinding Oppenheimer Blue diamond sold in 2016 for a tremendous £45.7 million at Christie’s Geneva. The auction room witnessed a tense and elongated phone battle between two anonymous bidders, heightening the mysterious allure of this exquisite gem. Previously owned by Sir Philip Oppenheimer (a family closely linked to the De Beers Mining Cooperation) this gem’s superior quality is visible through its mesmerising blue fluorescence. The tangible blue tones are hypnotic, leaving you desiring more… and more… and more… 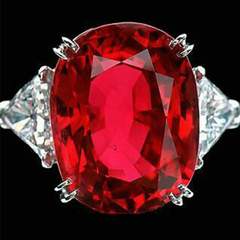 Cartier’s Sunset ruby ring evokes all the passion and heat of a volcanic explosion. Weighing an immense 25.59-carat, this scarlet spectacle truly demonstrated the allure of coloured gemstones selling at £19.6 million in 2015. This ruby stunned the auctioneer in terms of its unparalleled quality and craftsmanship. Effortlessly set between two penetrating icy white diamonds, the ring commands the viewer to consider whether the world will indeed end in fire... or in ice...


THE BLUE MOON OF JOSEPHINE 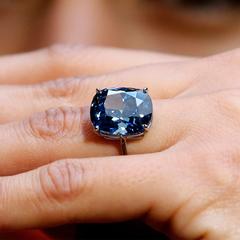 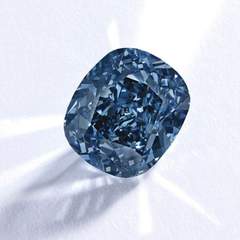 Blue moon, you saw me standing alone… poised with a  glittering 12.03-carat diamond on my finger. (I wish!) When sold for £31.7 million in 2015, this captivating blue diamond became the prized possession of a seven-year-old girl. Joseph Lau bought this blue vision for his daughter, Josephine, just one day after purchasing her a £19 million pink diamond at Christie’s! Lau certainly lives by the mantra that diamonds are a girl’s best friend, but I’m sure sweet Josephine doesn’t mind! 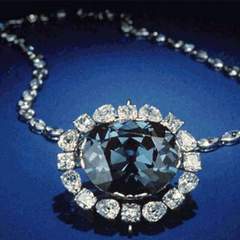 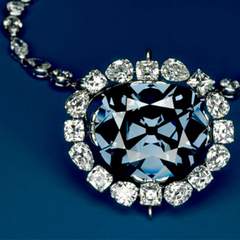 There’s hope for us all! The Hope Diamond necklace - whose value surpasses hundreds of millions of pounds - has not been sold or bought in centuries. Displayed in the Smithsonian Institute for the last sixty years, this dark blue creation radiates richness and indulgence. The piece - weighing 45.52-carats - was originally owned by Louis XIV, and thus carries momentous cultural significance (it was even stolen from the Royal Court during a looting in 1792) We permit you to feast your eyes on this beautiful blue specimen. Encircled in sixteen pear and cushion-cut white diamonds, and attached to a necklace of forty-five white diamonds, this piece illuminates the bourgeois mentality that: “one simply won’t do!” 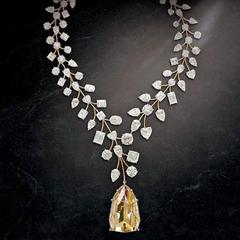 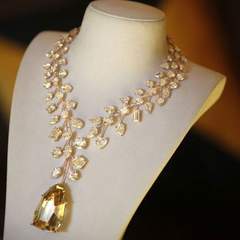 Like The Hope Diamond necklace, the value of L’Incomparable Necklace is merely estimated… but even at an valued price of £44 million, this jewel takes its rightful spot in the top ten most expensive jewels. The necklace was crafted by Lebanese jeweller, Mouawad and boasts its status as the world’s largest internally flawless diamond. Featuring an astonishing 407-carat yellow step-cut diamond, this necklace truly lives up to its name. The narrative behind this item epitomises the magic of diamonds. Discovered by a young girl within a discarded pile of rubble, the diamond became a cultural artefact before being sold and set into this extraordinary necklace. Consisting of a rose gold chain with a further ninety-one glittering white diamonds, ironically, this impressive item is all thanks to one little girl’s observant gaze.


A CITRUS DELIGHT: THE ORANGE DIAMOND 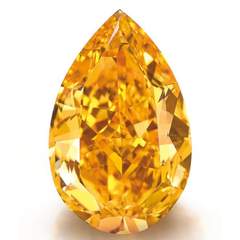 In 2013, the world witnessed the most delicious orange diamond sell at auction for an astounding £27 million. The annual Magnificent Jewels sale at Christie's showcases the world’s most exquisite jewels - and The Orange is no exception. With tangy hues of amber, honey and tangerine, this diamond coined ‘a miracle of nature’ is our most unique and vivid featured in our top ten. The diamond is the largest of its colour, priced at £1.8 million per carat and weighing a total of 14.82-carats. This orange dream would make every day feel as beautiful as Autumn.


THE BLUE BELLE OF ASIA 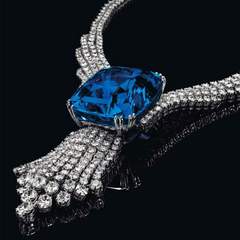 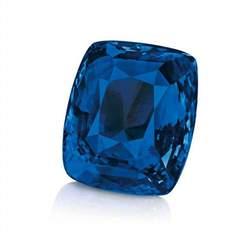 Sapphires weighing more than 100 carats are incredibly rare, and very few have graced the renowned jewellery auction houses such as Christie’s and Sotheby’s. The Blue Belle of Asia, weighing an immense 392.52-carats, defies the laws of nature. This enchanting blue wonder was discovered in Sri Lanka in 1926 and has an ominous history. Previously owned by Lord Nuffield, the gem had been an intended gift for Queen Elizabeth. However, as the day of her coronation loomed, the Blue Belle of Asia mysterious disappeared into the hands of a private owner. It took almost eighty years to reappear at an auction by Christie’s in Geneva, and consequently sold for a staggering £14 million. This masterpiece of a jewel has an enigmatic history, concealing the dark truth of its disappearance… Doesn’t that make it all the more desirable?


THE PINK LEGACY -  RIVAL OF THE PINK STAR 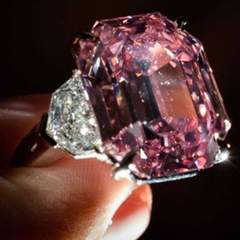 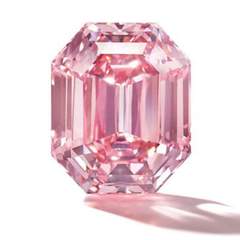 Just when you thought you couldn’t imagine a more magnificent pink diamond, the Pink Legacy bursts onto the scene… Last month, this priceless, emerald-cut pink diamond was sold to Harry Winston for £38.5 million. Its owners have since renamed the ring, The Winston Pink Legacy, adorning the ring itself with the iconography of a renowned family name. The intense pink saturation of this stone has been marvelled by diamond expert, Rahul Kadakia. The flirtatious and sensual colour oozes elegance - you can almost lose yourself within the transparent pools of pink.

Adorn yourself in diamonds... they're waiting to be worn.
Shop Diamonds
← Previous Next →
Categories
Recent Posts