We take a look at the meaning and history behind one of the most popular and historic motifs in jewellery design.

Derived from Latin ‘serpens’, meaning a crawling animal or snake, the serpent is one of the oldest and most recognised mythological symbol, and they are still as popular in jewellery design as they were in ancient Egypt. The sly and mysterious creature is often despised by many, yet when used in jewellery the serpent is a must-have motif, with metal interpretations winding around necks, slinking up wrists and coiling around fingers.

One aspect of the snake which makes it so intriguing and mysterious is its dual expression of good and evil, poison and medicine and fertility and rebirth. The creature has been notable throughout history; perhaps most famously for its role in the biblical story of Adam and Eve, tempting Eve to disobey God in the Garden of Eden and resulting in the loss of their innocence. Historically serpents have been commonly associated with fertility; due to them shedding their skin through sloughing, people see them as a symbol of rebirth, transformation, immortality and healing. However every culture had their own interpretation; in ancient Greece snakes were the symbol of wisdom, in ancient Egypt they were thought of as a supernatural being and signified royalty, whilst the Romans believed them to be a symbol of wisdom. 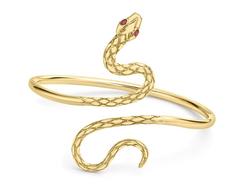 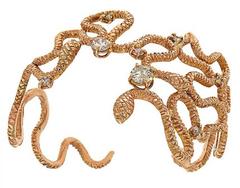 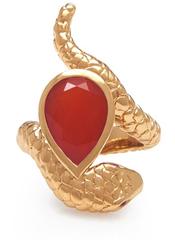 By far the most notable historical figure associated with serpent jewellery is Cleopatra, who was renowned for accessorising head-to-toe in snake jewels. However it was the engagement ring that Prince Albert gave to Queen Victoria in 1839 that cemented its iconic popularity; a continuous snake ring set with an emerald (her birthston) on its head. Symbolising eternal love, this ring sparked the trend for serpent jewellery which spread throughout England and Europe. Fast forward a few years and the snake motif had a prominent role in Art Nouveau jewellery, which heavily emphasised the essence of nature. Since then the snake motif has been embraced by many of the world’s biggest jewellery houses, with Boucheron, Cartier and Bulgari springing to mind first. Explore our collection of snake jewellery.